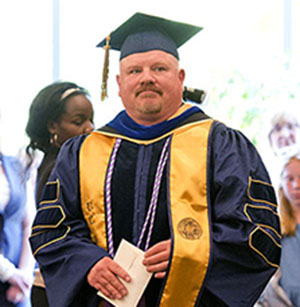 For half of his nursing career, Perry Gee used his skills as a nurse informaticist to focus on the physician side of the equation, supporting clinical decisions in a quantitative way. But during his graduate studies in the Nursing Science and Health-Care Leadership Doctor of Philosophy program at the Betty Irene Moore School of Nursing at UC Davis, he shifted focus dramatically. Driven by his desire to find better ways to manage chronic diseases, Gee embarked upon a research study that could help millions live better lives despite their illnesses.

“Our chronic illness condition is worsening every year and with an aging population that will only get worse,” Gee, a nurse and alumnus of the doctoral program, explained. “As health-care experts we haven’t found a way to slow down the process, so we need new tools to help people manage their diseases.”

Diseases, like heart failure, arthritis and diabetes, have created an increasingly sick population that drains the nation’s resources and lessens quality of life. Recent data shows that more than 145 million people, or almost half of all Americans, live with a chronic condition. According to a study by the Robert Wood Johnson Foundation, that number is projected to increase by more than 1 percent per year by 2030, resulting in an estimated chronically ill population of 171 million. Despite that dire reality, Gee discovered a lack of research on how people were using technology to manage their diseases, and why the rate of adopting those tools was so low.

Gee, who also earned a master’s degree in nursing science, interviewed technology-savvy patients, who were already using electronic personal health records. He hoped their perceptions of using the tool might eventually enhance the framework clinicians use to encourage people to manage their chronic diseases and develop productive interactions between them and their physicians. He found his research participants had taught themselves how to use the technology, had used it for communications with their provider teams and had great response the majority of the time.  He concluded using eHealth tools could increase patient involvement, prevent hospitalizations and have a big impact on overall health.

“My ultimate hope is to develop a training curriculum for both providers and those receiving care on how these systems can be used more effectively,” Gee added.

Now a faculty member at Idaho State University, Gee is teaching part time while continuing his research. He says his School of Nursing experience opened new doors and exposed him to new people he could never have imagined prior to his experience here.

“It changed the way I think about nursing,” Gee said. “The interdisciplinary focus shaped me, which in turn, will help change and improve health care.”