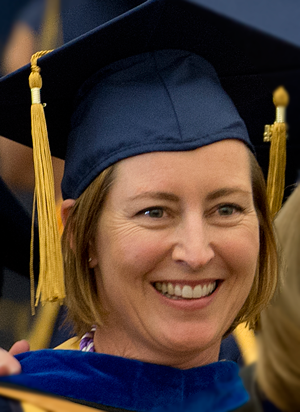 For more than a decade before pursuing her doctoral degree in the Nursing Science and Health-Care Leadership Doctor of Philosophy Degree Program at the Betty Irene Moore School of Nursing at UC Davis, Sheridan Miyamoto was on the front lines of child abuse. A nurse practitioner working as an emergency response, pediatric sexual assault examiner, Miyamoto saw social systems designed to protect at-risk children fail. Her doctoral research set her on a path to affect broader, system-level change to help child advocates identify early on when intervention might stave off a bad outcome.

“What was striking to me was how often we were seeing the same children, again and again, often for the same reason they were removed from the home initially,” Miyamoto said. “It was apparent to me that our systems weren’t working as well as we thought. Even though Child Protective Services works closely with the courts, forensic experts, and community programs, we weren’t offering what was needed to improve conditions for families and children in order to prevent further serious child maltreatment.”

For her doctoral dissertation, Miyamoto examined worst-case scenarios where a child had died or was hospitalized as the result of maltreatment. She identified cases where a child experienced a serious outcome due to abuse for which the family had previously been investigated by Child Protective Services. Miyamoto surmised if social workers had a complete picture of the family dynamics at play, and how those dynamics might affect risk of subsequent abuse, they could have provided them with help in advance of a bad outcome. Miyamoto mined two databases that are not accessible to social workers, the County Mental Health Utilization Database and the County Alcohol or Other Drug Treatment Database. Changing policy to allow social workers access to mental health information protected by privacy laws is a delicate discussion, but Miyamoto’s research has sparked conversations between child welfare stakeholders.

“I hope to build concise, easy-to-use risk tools that would identify families who are most at risk of these serious outcomes to alert case workers earlier,” Miyamoto explained. “They would see what families might have risk factors highly predictive of a dire outcome and intervene before it’s too late.”

Miyamoto was awarded a prestigious Doris Duke Fellowship for the Promotion of Child Well-Being, one of only 15 graduate students nationwide selected for the award each year, to fund her research. Currently she is a project manager at the School of Nursing working on an initiative for wireless health and wellness and interviewing for faculty positions, roles she’s more confident in because of her time at UC Davis.

“The School of Nursing brought me to a place where I’m ready to be an independent researcher and contribute to a faculty,” Miyamoto said. “My education, coupled with my experience as a research nurse, provided me the opportunity to take part in a project from beginning to end and the knowledge to conduct larger research projects aimed at impacting health-care and child welfare systems.”