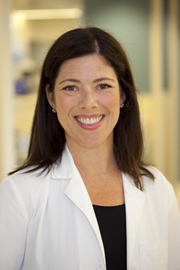 Editor's note: This story was first published in winter 2012. As of June 2014, Madden is graduate of the School of Nursing.

The two-year predoctoral fellowship of $34,095 supports Madden’s training and development as a researcher by contributing toward her educational expenses such as conferences, training and classes. Madden is the first School of Nursing student to receive a federal grant for research training.

“It’s very satisfying to have my ideas and effort acknowledged at this level,” Madden said. “This fellowship will enable me to reach out to a broader audience of researchers, for greater learning and collaboration.”

Madden’s fellowship is known as the Ruth L. Kirschstein National Research Service Award for Individual Predoctoral Fellows in Nursing Research. According to the National Institute of Nursing Research, the award is designed to “train future generations of outstanding nurse scientists who are committed to research careers in scientific health-related fields.” Fellowship applications are reviewed based on the academic and research record of the applicant, the applicant’s potential to develop into a productive researcher, and the quality of the proposed research and training plans, among other criteria. Madden aims to become an independent research scientist looking specifically at ways to improve outcomes for those who experience traumatic brain injury.

“This fellowship indicates that the National Institute of Nursing Research recognizes Lori’s work has the potential for great impact and that she is deserving of support to help her establish an independent research career,” said Holli A. DeVon, an associate professor at the Betty Irene Moore School of Nursing and Madden’s primary sponsor for the grant. “This is a wonderful accomplishment for a developing researcher like Lori.”

The fellowship will provide research training support for Madden as she conducts her dissertation research, “Impact of Temperature Profile on Outcome After Traumatic Brain Injury.”

Traumatic brain injury occurs when an external force injures the brain. It can happen during sports accidents, car crashes, and other violent collisions. According to the Centers for Disease Control and Prevention, an estimated 1.7 million people experience a traumatic brain injury in the United States each year, and it is a contributing factor to a third of all injury-related deaths nationwide.

Madden’s research examines the association between body temperature and neurologic outcome among individuals who experience this kind of injury. A nurse practitioner with UC Davis Health’s Department of Neurological Surgery, Madden collaborated in clinical research investigating the use of hypothermia as a therapeutic intervention for individuals with severe brain injuries. She observed that many patients developed a fever within hours of their hospital admission, and she grew interested in defining the impact of these temperature changes on subsequent neurologic recovery.

“Nurses are the people who identify abnormal body temperature and intervene to address it,” Madden said. “In this way, they have a key role in making a tremendous difference in the outcome for these patients.”

“I think there may be significant implications for day-to-day health-care practice and for policy,” Madden said. “We might just begin to think differently about the urgency of the situation when these individuals develop a change in body temperature.”

As part of her project, Madden will convene an interdisciplinary panel of experts to validate her research findings and identify future directions for nursing research and the implications for nursing practice.