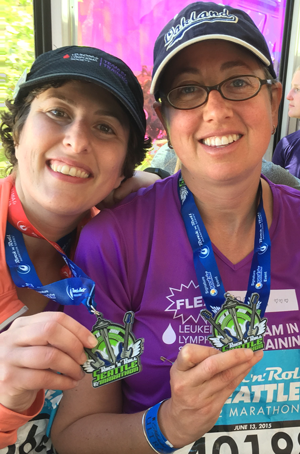 While in high school, Robin Whitney volunteered with the California Cancer Registry. The experience first shaped her perspective on health care, sparked her interest in nursing and equipped her for a fight that arrived 15 years later.

“I learned how pesticides might affect childhood cancer rates,” recalled Whitney, a Fresno native and nurse pursuing her doctoral degree at the Betty Irene Moore School of Nursing at UC Davis. “It was my first experience with health disparities. I couldn’t believe that certain people were at greater risk than others for developing cancer, simply because of where they lived.”

Fresno lies in California’s Central Valley, producer of a quarter of the nation's food and fiber, where pesticide use is predominant. Whitney earned her bachelor’s degree in nursing in Maine, worked in neuroscience nursing at Mayo Clinic, but ultimately wanted to come home to the Central Valley. At Children’s Hospital Central California, Whitney earned a certification in pediatric nursing and took a leadership role as a charge nurse.

“I enjoyed working with people at the bedside, but when I was a supervisor I was the one to face families when something went wrong,” Whitney said. “Every place I worked, I witnessed errors that reflected more on problems with the hospital system than on the competence of the individual physicians and nurses involved in the error. This is really what drove me to return to school to address systems-level issues.”

An unexpected diagnosis
In 2012, Whitney embarked on the Nursing Science and Health-Care Leadership Doctor of Philosophy program, interested in quality improvement. One-and-a-half years in, she was diagnosed with non-Hodgkin’s lymphoma, a type of blood cancer. Immediately she began an intensive chemotherapy regimen at a Central Valley facility.

“When I went in for my first session, it was terrible,” Whitney explained. “The room was crowded. There weren’t enough chairs for everyone. Nurses busily ran around without explaining procedures. It made me wonder what wasn’t being communicated to those of us in treatment.”

After the first round of chemo, Whitney learned she’d been administered the wrong dosage. That information devastated her, but she recognized how the error could happen.

“I get it! The doctor’s orders were written in an ambiguous way; the nurses and pharmacists didn’t ask enough questions; they were supposed to be part of a team, but they weren’t communicating with each other,” Whitney said. “If I had not discovered the information for myself, I don’t think anyone would have picked up on it.”

Turning tragedy to triumph
That personal experience continues to shape her future as a researcher. Whitney joined an interdisciplinary team from the School of Nursing and the Comprehensive Cancer Center at UC Davis investigating how tablet computers and reimagined social-networking software can improve chemotherapy experiences and outcomes. At the inaugural Palliative Care in Oncology Symposium, she presented research that examined employment and financial challenges that disproportionately affect cancer survivors.

“Conducting systems-level research requires we use large data sets and examine quality and safety issues from a high level,” Whitney explained. “My experience helps me keep the individual person present in all my research. I bring a unique perspective because I understand, as a provider, how mistakes happen and, as a patient, how it feels when things go wrong. Hopefully the end result will be research that makes a difference.”

When physicians pronounced Whitney in remission in October 2014, she incrementally ramped up her physical activity. In June, she joined The Leukemia & Lymphoma Society's Team in Training, which funds blood cancer research and supports those with the disease. She recently completed a half marathon in Seattle. She also now serves as a peer mentor with the Patti Robinson Kaufman First Connection Program. As a volunteer, Whitney provides community resource information to others facing a similar diagnosis. She sets new goals through her athletic pursuits and her academic endeavors.

“The health challenges and disparities that exist in the Central Valley provide a lot of opportunity for the type of research I plan on doing,” Whitney said. “Cancer, quality of care and serving the Central Valley ― these areas hold personal meaning for me and this is where I hope to make things better for everyone.”