How the pandemic and personal experience sheds light on Hmong Americans 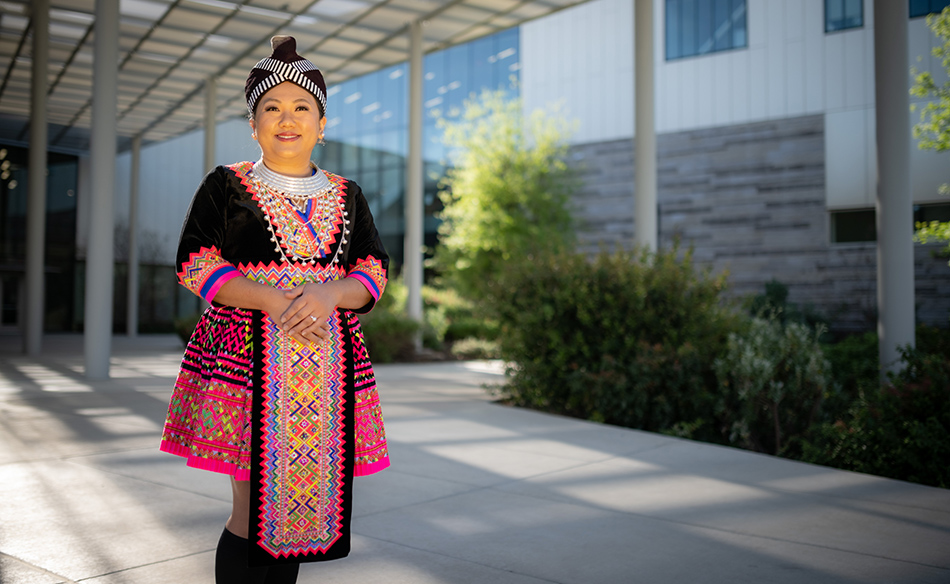 Kaykay Vang, a doctoral candidate at the School of Nursing, focused her research on the Hmong American community. As a Hmong American, she values her culture, such as traditional Hmong clothing.

California is home to the largest Hmong population in the country. But if you look in health care research and policy, they’re invisible.

Members of an ethnic group from mountainous regions of China, Vietnam, Laos and Thailand have never had a country of their own. And their voice in health care research has been silent … until now.

“My dissertation initially set out to understand how we diversify the nursing workforce, especially when the population of ethnic minorities is growing,” explained Kao Kang Kue “Kaykay” Vang, a doctoral candidate at the Betty Irene Moore School of Nursing at UC Davis. “But I kept coming back to my roots of being unrecognized ethnic minority. There is no representation of Hmong Americans in the health care workforce.”

Then the pandemic hit.  As a quality nurse consultant for Kaiser Permanente in Northern California, she watched the “scary and surreal” reality of whether or not there would be enough intensive care unit beds and ventilators across the 21 centers she oversees.

“It was such an eye opener! Looking at public health, nursing, health care organizations and policy, we were being plummeted,” Vang said about her community. 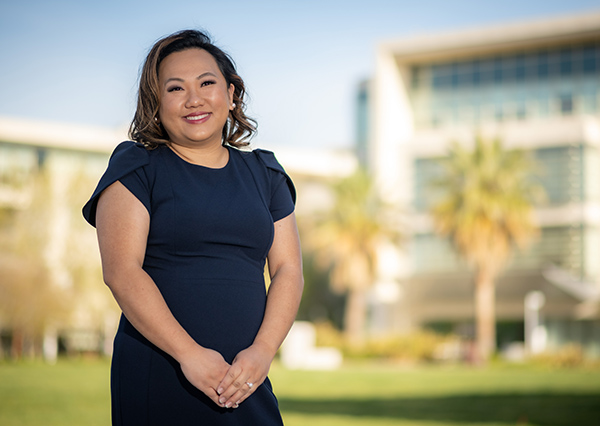 Vang’s research focus became clear. She began looking at mitigation behaviors in the Hmong community, namely what measures people were taking to stay safe, if those approaches were effective and what resources they found.

“My research mentor, Dr. Sheryl Catz, met me where I needed it and took me under her wing,” Vang recalled. “We brainstormed and figured out to narrow my research.”

A doctorally prepared clinical psychologist with a specialty in behavioral medicine, Professor Catz has amassed a wealth of information on the scientific study of behaviors relating to a person’s health and well-being and the ability to thrive in the face of life-threatening and chronic health conditions. Her teaching enables doctoral students to objectively evaluate dissertation topics that deserve their time and talent.

Vang sought to understand four mitigation approaches in the Hmong American community — masking, social distancing, avoiding group gatherings, and vaccine intent and use. She examined these behaviors in the context of social and cultural factors, family values, religious beliefs and health practices.

Due to the pandemic, she conducted her research online. So, the sample tended to be younger, more educated and more affluent. Despite that demographic makeup, their behaviors surprised Vang.

“I found that gender roles were key. The Hmong men are highly influenced by their community or clan leaders, so they attended and gathered at events and disregarded health care guidance. This, compared to Hmong women, who are not expected to participate in these gatherings, so they remained distanced.”

The influence of cultural values did not stop there.

“I also found that even though this segment of the population seeks Western medicine for primary and preventive care, they chose traditional approaches, some visiting a shaman, to prevent and treat COVID-19 symptoms during the pandemic,” she said.

Such clinging to traditional approaches did not prepare Vang for what she learned when it came to the COVID-19 vaccine. In her sample, 69% of her people immediately got the vaccine when it became available.

“Historically, Hmong Americans are hesitant to get seasonal vaccines like the annual flu shot. So, what changed?” Vang said.

She suspects this mitigation behavior had a lot to do with what was going on at the time. The virus is highly contagious and there were more widely available campaign materials about COVID-19 than any other vaccine. Her questions linger, as does her desire to reach the older populations of Hmong Americans who are most at risk and face increased barriers, such as language, literacy and socioeconomic differences.

“This research is a small pebble in the big sea of things, but it gives insight to show cultural factors that make a huge impact. I learned there’s still a lot of work that has to be done for a better understanding of Hmong Americans,” Vang said.

Vang hopes to push not only for additional research on Hmong Americans, but also for subgroups of all ethnicities to be called out in research, rather than grouped into large demographic samples. Hmong Americans are always grouped with Asian Americans, which is a very diverse group. Vang argues that every group should get their own data to get a realistic picture of the health disparities that exist.

“If data isn’t there, you don’t get the funding. Until that data is brought forward, those populations are invisible,” she explained.

Vang is slated to earn her Doctor of Philosophy Degree in June and present her dissertation that, she says, could only have been accomplished at the School of Nursing.

“I don’t think I would have been able to bring it all to light without the mentorship and relationship with Dr. Catz. As a student at the School of Nursing I was also given the opportunity to interact with faculty in other UC Davis departments. I could not have gotten the perspectives and diversity if I had not been here during this time.”