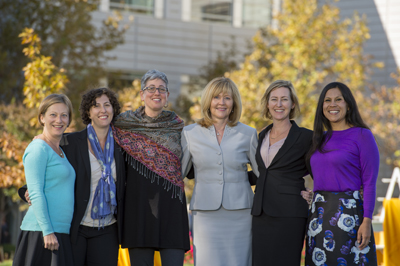 Every year, U.S. nursing schools turn away thousands of qualified applicants from baccalaureate and graduate nursing programs, the majority reporting they do so due to a lack of faculty. The Betty Irene Moore School of Nursing at UC Davis strives to increase the number of doctorally prepared nurses to teach future nurses at four-year institutions. That goal is shared by the Jonas Nurse Leaders Scholars Program, which will award $40,000 for four Doctor of Philosophy students at the School of Nursing to pursue their passion to teach new nurses.

“At some point in all our lives we depend on nurses and they deserve more support,” said Donald Jonas, co-founder of the Jonas Center for Nursing and Veterans Healthcare. “In this new era of health care it is especially important for the philanthropic and business communities to invest in nursing education, particularly at the doctoral level.”

Supported by the Jonas Center for Nursing and Veterans Healthcare, the scholars program provides financial assistance, leadership development and networking support to expand the pipeline of future nurse faculty and advanced practice nurses. Including the newest grant, 10 students from the School of Nursing will ultimately receive scholarship support totaling $120,000.

“Support from the Jonas Center allowed me to focus on an interdisciplinary, collaborative childhood obesity research project in an underserved, low income community,” explained Lisa Martinez, a 2014 doctoral graduate and former award recipient. “The skills and knowledge that I gained provided me with a strong foundation for a career in nursing practice, research and education.”

The renewed commitment from a national organization speaks volumes for the value of investment in students here.

“I applaud Barbara and Donald Jonas for their vision to establish this program a decade ago,” said Heather M. Young, founding dean. “These dedicated individuals, through their generosity and advocacy, advance our potential to impact health care in a positive and meaningful way.”

The School of Nursing Admissions, Fellowship and Recruitment Committee will select the 2016 recipients later this year.