Achieving a goal, going beyond in a pandemic 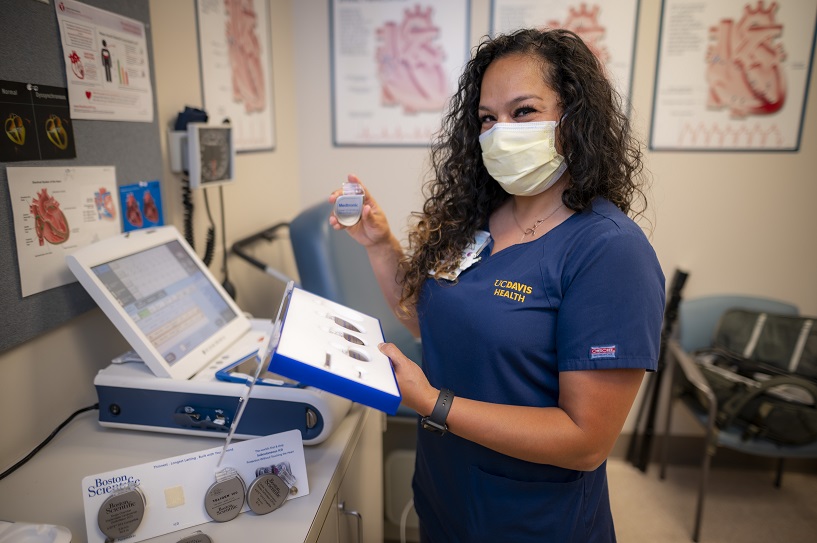 Irene Cisneros-Fong, a 2019 graduate of the Master’s Entry Program in Nursing, at the UC Davis Health Cardiology Clinic.

After working as a pacemaker technician for nearly a decade, today, she leads a team of cardiac device technicians in the UC Davis Health Cardiology Clinic.

Those lessons learned at the School of Nursing proved beneficial during COVID-19 and her 10 months in the Emergency Department. Now, that same knowledge of the social determinants of health, emphasized by coursework and a poverty simulation exercise, prove valuable every day.

“You see how you have to interact with the physicians, case managers, pharmacists, even mental health workers,” she recalled. “Having that already set in place from the school made it a lot less nerve wracking to work with them and get a care plan for the patient.”

“Even though I’ve been a nurse just over a year, I’ve already written policies to make the device clinic more efficient,” she said. “Latina cardiac device nurses are not that common. Now, I want to take what I’ve learned and present at national conferences.”

Are you interested in applying to the Master’s Entry Program in Nursing? If so, you can learn more on the program web pages. Prospective students may also sign up for the school’s email group to receive regular updates about the school’s graduate degree programs.

Nov. 13 — Family Caregiving Institute director leads 2021 Gerontological Society of America conference
Terri Harvath, director for the Family Caregiving Institute at the Betty Irene Moore School of Nursing at UC Davis and senior director for strategic initiatives at the school, led the four-day Gerontological Society of America (GSA) 2021 Annual Scientific Meeting Nov. 10-13. Terri, who serves as the 2021 GSA president, led a number of sessions at the annual meeting. She opened the conference with presidential remarks and the announcement of annual award winners. She also introduced the keynote speaker, Jessica Zitter, a physician and filmmaker who directed “Caregiver: A Love Story.” Terri also led the annual business meeting and installation of the society’s 2022 president. Finally, she served as panelist and discussant for several symposium sessions. The event concluded her year as the society’s president. She now serves as past president. GSA is the oldest and largest interdisciplinary organization devoted to research, education and practice in the field of aging. GSA’s principal mission is to promote the study of aging and disseminate information to scientists, decision makers and the general public.