A single mother of two teens used her last bus pass to travel to the county welfare office — only to wait in line and be turned away at the end of the day. Parents chose between going to work or meeting with a child’s teacher. Older adults decided whether to fill a prescription or buy food. Grandparents forced to raise children because the parents are not around. 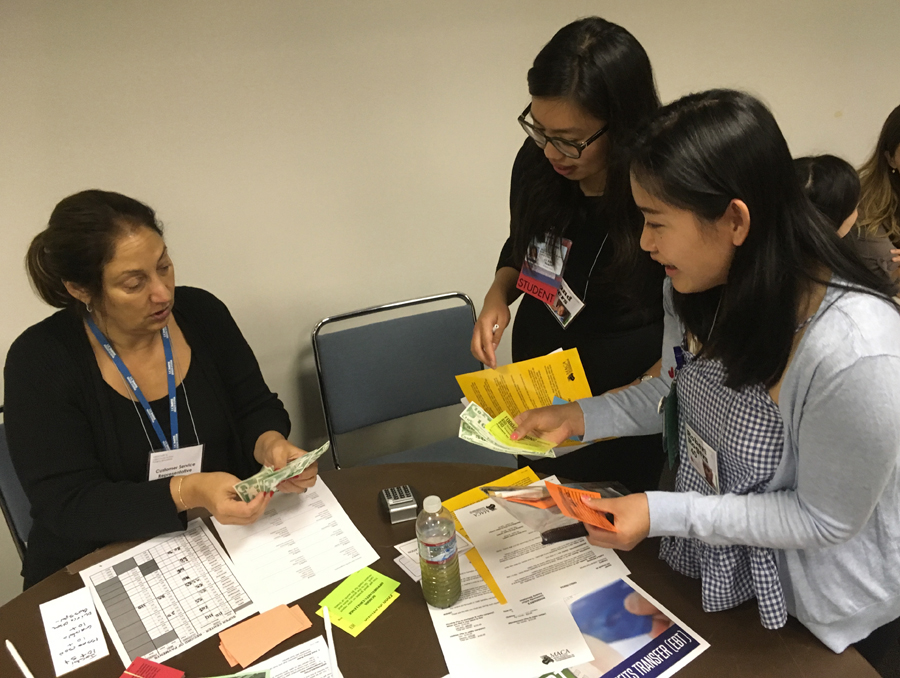 These and many more scenarios played out as part of a poverty simulation for entry-level nursing students at the Betty Irene Moore School of Nursing at UC Davis. The goal is for students to better understand what it is like to live in poverty. That perspective, said Jessica Draughon Moret, an assistant professor of clinical nursing at the school, allows students to better recognize the barriers many people face in trying to access health care services. “We want our students to think globally from the get go. This is part of how we prepare nurses to work in often broken systems and develop creative solutions,” Draughon Moret said.

“I never really thought about how poverty affects patients,” said second-year Master’s Entry Program in Nursing student Eric Yai. “This was very eye-opening. I didn’t realize how quickly you can become desperate…there were times I didn’t know what to do.” Both first and second-year entry-level nursing students recently participated in the four-hour Community Action Poverty Simulation. Through the exercise, students assumed the roles of members of several families that faced a variety of challenging circumstances typical of today.

The students were tasked with surviving a month, which was simulated as four, 15-minute weeks. Each week, the families were asked to provide food, shelter and other basic necessities by accessing various community resources such as grocery stores, health care clinics, social services, government agencies and more while also managing jobs, school and family life.

About 20 volunteers played the roles of resource providers as well as police officers and even criminals tempting the participants with money and drugs. The exercise was followed by both small, and then full, group discussions.

“We heard a lot of students say, ‘I felt desperate, I felt helpless,” Draughon Moret said. “We know there’s no way students can step into other people’s shoes and experience real poverty. But, through this experience, they get a brief experience of the many choices and decisions those living in poverty face. For example, they may someday see a patient whose first priority isn’t health care, but finding the next meal.”

One first–year nursing student was doubtful at first that a simulation could effectively demonstrate the impact of poverty.

“Initially, I thought there’s no way they’ll be able to simulate poverty,” said Cassi Carter. “But it was amazing. It was so vivid, so clear.”

Carter, who said she experienced poverty at one point in her life as a young, single mother, said the simulation reminded her of her previous life.

“I remember how it felt to be struggling to keep the lights on, to pay the mortgage or the rent,” she said. “I also remember how the kindness of just one person can make the difference.”

Her twin sister, Crissi Patel, also a first-year Master’s Entry Program in Nursing student, said she, too, was struck by the reality of the simulation.

“During the debrief, I shared with my classmates that this is real, this is it what it’s like,” she explained. “You do what you have to do survive.”

These newfound perspectives will be applied in students’ future nursing careers.

“This helps me understand people and see people from a more holistic view,” Carter said. “I can view people from a different lens and have a better range of understanding.”

Yai said the poverty simulation is just one example of how the Betty Irene Moore School of Nursing teaches future nurses who focus on patient-centered care and truly understand the needs of each individual.

“We are being taught to look at the patient as a person first,” Yai said. “We need to understand what’s happening to that person right now, what they need right now, physically and emotionally.”

Carter said that preparation is critical.

“The education is not only preparing me to be a good nurse, but to be a better person,” she said. “In just the six weeks I’ve been here, this program has changed my perspective on many things.”

Draughon Moret said she and other faculty hope to see the simulation evolve into an annual exercise and she even dreams of expanding it to include other students and community members.

“The important part is that the experience opens participants’ eyes to the many barriers people face,” she said.

Nov. 15 — Alumna awarded funds to present at national informatics conference
Sayantani Sarkar, a 2021 graduate of the Doctor of Philosophy Degree Program at the Betty Irene Moore School of Nursing at UC Davis, was one of eight recipients of the 2022 Annual Symposium Travel Award to present at the 2022 American Medical Informatics Association (AMIA) Annual Symposium in New Orleans Nov. 11-15. The award provided funding for Sayantani to present the poster, “Acceptance and Use of Mobile Yoga Application by Breast Cancer Survivors: a Brief Intervention Study,” which was also her dissertation topic. She said she is currently participating in a research project to co-design methodologies with the AMIA consumer health informatics working group. She is a postdoctoral scholar at Yale University School of Nursing.

Read the 2022 edition of the Betty Irene Moore School of Nursing annual magazine.