The power of adapted technology to improve health in entire populations

Could teenagers and their iPods make a community healthier? Youth from the Karuk Tribe and a professor from the Betty Irene Moore School of Nursing at UC Davis teamed up to find out. What they discovered could benefit populations across the globe.

Katherine Kim, an assistant professor at the School of Nursing, recently concluded a three-year project that partnered with the Karuk youth in Northern California. Situated in the Klamath Basin in Humboldt and Siskiyou counties, the remote area presents an ecologically diverse ecosystem, yet the community’s access to nutritional foods is severely limited compared to other regions of the country. Through a multistate and multi-institutional project funded through a $5 million U.S. Department of Agriculture (USDA) Food Security Grant, researchers aim to achieve a sustainable food system in the Klamath Basin that results in healthy communities and ecosystems among the Native American tribes who live there.

“Special populations, such as Native Americans, underserved or rural residents, don’t have access to health care delivered by people who understand their environment, culture or language. Technology has the power to bridge that divide where sometimes humans cannot,” Kim explained. “We can quickly adapt mobile technologies and social networking applications to fit very specialized needs and meet user perspectives in order to solve problems.” 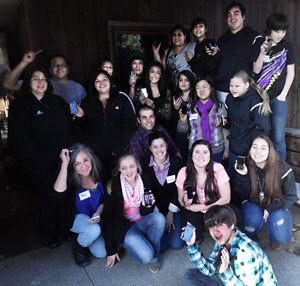 Karuk youth use iPods to interview community members about access to fruits and vegetables, views about their health and challenges to being healthy. Photo provided by Grant Gilkison.

Kim, who earned her doctoral degree from the School of Nursing in 2014, led a team that trained Karuk youth to serve as researchers within their own community. Together, they developed a survey and learned how to use mobile tools to interview community members. Kim and her team gave youth the tools. The young people then chose in which direction to take the research.

“Kids are brilliant if you give them a chance,” said Grant Gilkison, community outreach and tribal liaison for the Mid-Klamath Watershed Council, who is co-lead on the youth initiative for the USDA grant. “For the first time in their lives, these kids were a part of something. For people to stand up and notice them and congratulate them, they were shining stars in the eyes of their peers.”

The USDA deems the region a “food desert.” For example, in the city of Orleans only a liquor store with limited food options exists. The closest grocery store is 15 miles away on the Hoopa Reservation. Yet many suffer from obesity and other health and social problems, a common problem associated with food access issues, and a lack of education and leadership opportunities.

For this project, Kim used software originally developed for community-health workers in Kenya and ran it on iPods. She says the fact that mobile devices could be adapted to promote health decision making ― in the absence of Internet connectivity ― illustrates the promise of technology in rural areas. The youth formulated questions, then interviewed community members regarding access to fruits and vegetables, views about their health and challenges to being healthy. Data collected with the iPods is expected to be published later this year in a report co-authored by the student researchers. While the results are specific for this community, the project’s design has far-reaching implications for other special populations.

“This type of participatory design, which is learning both the features users want and the context in which they will use them, is exactly what patient centeredness is in health care,” Kim explained. “With mobile technology we can tailor programs for each individual or group of people, rather than rely on a one-size-fits-all approach.”

In March, Kim shared both her experience in the Klamath Basin and how it can be applied to health care systems as a whole with a health care technology roundtable at the Institute of Medicine. Meanwhile, the experience transformed the lives of youth who participated, prompting several to go on to college and professional schools.

“Some of them would have never left this valley if they hadn’t had this experience,” Gilkison added. “From the leadership training to learning how to speak in front of people, these students were engaged the entire time and are now pursuing opportunities they’d never conceived of before.”

Aug. 26 — School of Nursing professor leads virtual discussion on vaccines and fertility
Jann Murray-García, an associate professor at the Betty Irene Moore School of Nursing at UC Davis, led the panel discussion, “Baby Talk: Addressing COVID Vaccines and Fertility,” for the Northern California National Council of Negro Women (NCNW). The discussion focused on women’s concerns regarding COVID-19 vaccines and their fertility. Panelists included physicians Oliver T. Brooks of Watts Healthcare Corp. and Sara Whetstone of UCSF, as well as Kimi Watkins Tartt, the director for the Alameda County Public Health Department. The event was part of the NCNW Good Health Women’s Immunization Networks (Good Health WINS), an initiative to educate communities and address health disparities through increased vaccination rates. NCNW is comprised of 300 campus and community-based sections along with 32 national women’s organizations that seek to lead, empower and advocate for women of African descent, their families and communities. Jann was invited to moderate the event by Jacqueline Dyson, a School of Nursing administrative assistant and long-time NCNW member. Jann said staff members play an important role in connecting faculty with national efforts, especially in under-represented communities, such as the NCNW event.

Read the 2020 edition of the Betty Irene Moore School of Nursing annual magazine.